With Democrats just having captured a large majority in the House (235 seats), one of the positives for Republicans was that they were able to increase their Senate majority by 2 votes to get to 53. I was expecting Republicans to do a little better, however, and get to 55 by picking up the John McCain seat in Arizona and take the John Tester seat in Montana. Republicans were only able to add seats in Florida, Indiana and North Dakota on the heels of the Kavanaugh hearings and I was expecting them to do better. So I got a negative disappointment here versus my expectations. While my political prognostications are vastly better than most of what you see out there, I still review my failures even as small as they are to see what I got wrong. In the shadows of those marginal surprises is where big new political trends lurk. In particular, what pissed me off to no extent was the loss of the Arizona Senate seat. The GOP most definitely screwed up with Martha McSally who was a weak candidate but I still thought the McCain mafia was going to push her through. But they couldn’t and that is super important because the demographic trends in Arizona don’t get any easier for the GOP over the next 2 years. If Kyrsten Sinema could squeak by in 2018, her clone will trample in 2020. 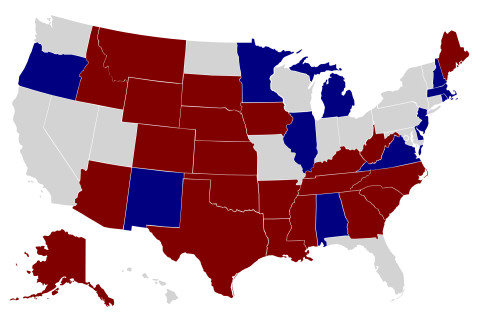 While the map for Democrats was historically difficult in 2018, the script is going to flip in 2020 when the GOP will face a historically difficult map. In 2020, the GOP will defend 22 Senate seats while the Democrats will only defend 12 seats. It is a sea of red up there. Most of Democratic seats up for grabs are in Democratic strongholds such as Oregon, Illinois, Virginia, New Jersey or Massachusetts. The only real question mark for Democrats is the Doug Jones seat in Alabama. On the other hand, Republicans have a very problems in a lot of places. Here is a list of the Republican Senators who won with less than 53% of the vote:

This is definitely a list of Senate seats that can flip Democratic in 2020. Democrats just won in Arizona and demographically they will only build a bigger lead in this state over the next 2 years. Add Colorado, Georgia and North Carolina to this list of states that are going through a demographic makeover. Iowa and Kansas voted with a decidedly Democratic bent in 2018 at the House level. Some of the shocking victories for Democrats in 2018 were in the Bible Belt. In Maine, we have a unique situation where Susan Collins has made some big votes (most notably for Kavanaugh) which can cost her in what tends to be a very Democratic State otherwise. Maine doesn’t have a single Republican House representative.

If I was to handicap this, this I would say Democrats lose the Doug Jones seat but gain seats in Arizona, Alaska, Colorado, Georgia, Iowa, North Carolina and Maine. This is a net pickup of 6 seats. So Senate goes from 53 seats for GOP to 53 seats for Democrats in 2020. Chuck Schumer had a very mysterious smile the entire time during the “Rumble in the Oval”. The reason why he had the smile is that he knows that Trump’s Senate majority will only last 2 years. And after that the Senate goes back into Democratic hands with 95% probability.

Guess what that means? The Democrats will be digging in their heels big time against Trump. Every trick in the book will be used against him. And if Trump is impeached or loses the 2020 election, with an even bigger Democratic majority in 2020 and 53 Senators, the entire Trump agenda will get erased from the history books. The tax cut, everything. If there are any “deals” or wins for Trump over the next 2 years, they will be all on Democratic terms. Don’t expect Chuck Schumer and Nancy Pelosi to back down on anything. And given the progressive bent of the new incoming Congress, even if anything gets done, I am not sure there will be much gravy in it for Wall Street. Sorry.

View all posts by VIXCONTANGO