I recently went to the inaugural Real Vision conference in New York City and many of the video segments presented there featured interviews of hedge fund managers who became famous in the 80s like Felix Zulauf and Paul Tudor Jones. I am sure these investing legends are very smart guys, but I couldn’t help noticing that most of their legendary status came about by them simply being in the right place at the right time. It was very hard to make an investment mistake buying long duration bonds or stocks in the early 80s. In 1982, inflation was 10% and FED overnight rates were north of 15%. Certificates of Deposits yielded 20%. 10-year treasuries yielded 15%. Stocks had single digit P/E ratios. Most of these guys were obligated to be invested by the mandates of their funds. If inflation went down and FED cut rates, all of their assets whether bonds or stocks were going to get reflated higher. So was it really investment skill that made them famous? Or was it Paul Volcker?

Let’s look at the infamous crash of 1987. Many of these investment legends went to cash in the summer before the crash. But was the decision to go to cash really that difficult or legendary of a decision? Here is what the top 10 annual S&P 500 (SPX) returns (not including dividends) looked like from 1950 to 1987: 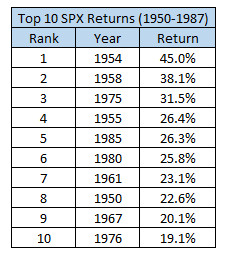 In 1987, the SPX first hit 35% year-to-date on August 10. It went as high as 39% on August 25th. On October 5th, a few days before the crash, the SPX was still at 35% on the year. So the SPX is sitting on the 2nd or 3rd best annual returns in nearly 40 years in the late summer for a couple of months from August through October. How many asset managers do you think were thinking “I am up 35% on the year, the CPI is only 4%, the FED is hiking rates, time to put money in a 7% CD and go on vacation till the end of the year”?

And that is why the market crashed.

It didn’t take a legendary mind to make that decision. It is common sense, common risk management given the historical distribution of annual returns. I would give some credit to those who shorted the market that summer but again not too much credit. Going short the SPX at 35% year to date had 95% historical odds of success!